IN CIVIL UNREST, HOW DO WE KEEP EACH OTHER SAFE? 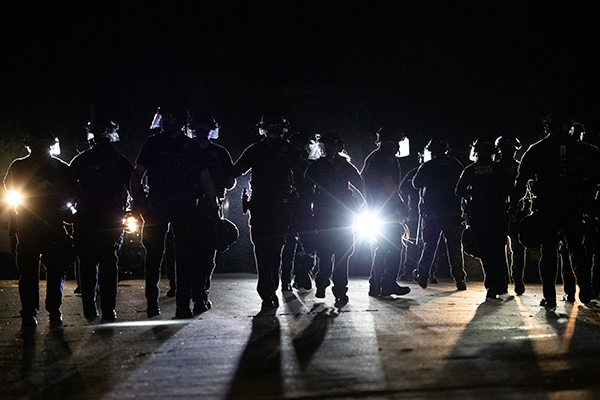 Police line up on the 101st consecutive night of protests against police violence and racial inequality in Portland, Oregon in September 2020. REUTERS/Caitlin Ochs.
BY BETSY SHIRLEY

NONVIOLENT PEACEFORCE is an international nonprofit that works with communities facing violence to implement nonviolent strategies to help keep them safe. They have worked with communities around the world, including in Sri Lanka, Iraq, South Sudan, and Guatemala. Mel Duncan, Rosemary Kabaki, and Jessica Skelly of Nonviolent Peaceforce spoke in mid-September with Sojourners’ Betsy Shirley about their newest project location: the United States.

Sojourners: Why did you start projects here in the U.S. this fall?

Mel Duncan: We recognize that right now there are many indicators of looming violence, whether it be strife over police brutality and racism, or the chaos that is being stirred up around the election, or the catastrophic experiences we’re seeing with climate change—all of these can trigger violence.

What risks do you see?

Jessica Skelly: As we look toward the elections and beyond, we can see some indicators for flashpoints of violence—election tampering, delays in the election, perhaps continued police brutality, instigation by agents provocateurs—and people want to know how they can mobilize in responsible and constructive ways and help de-escalate some of that violence and protect themselves.

How can we start preparing to keep people safe in the event of a contested election or mass protests?

Rosemary Kabaki: Our first step usually is in building relationships. Communities always have methods of protection that they already have been putting in place, and this starts giving us an entry point.

Skelly: So [start] making those relationships in your own communities and connecting with each other and understanding what needs you have as an individual and as a community. How can you best protect each other? And then, from there, putting in more practical steps, like: “If I’m going to be out here nonviolently protecting myself and my neighbors, what do I need to do to make a responsible contingency plan? Who should I be in contact with—at the state level, local level, community members on the ground? Where are the closest medical facilities?” For us to protect each other, we first have to protect ourselves. So contingency planning, relationship building, and context analysis are really, for me, the key areas of preparation.

What other strategies can help keep people safe in the event of conflict surrounding the elections?

Duncan: The first thing is to provide direct protection—providing presence at polling places that may be disrupted, providing accompaniment to people who are going to vote, and [making] sure that those processes are kept as sacrosanct as possible. People need to learn basic de-escalation techniques, so when there are further demonstrations, people are able to de-escalate and prevent violence, regardless of who that comes from.

Another one would be learning how to effectively interposition yourself between two conflicting forces, to keep one group from the violence of the other. Those are methods that can be trained. They are not done capriciously; you have to do the ongoing context and conflict analysis.

It’s also important for those of us who are doing unarmed civilian protection to build relationships with the combatants. We never advocate that you just parachute in between two combatant groups—that’s a good way to get hurt or killed. You need to be able to have respectful communication with people who you may diametrically oppose, whether that be the police, or the unidentified federal forces, or the white supremacists, or the people who have been showing up with guns. It doesn’t mean they have to like us or that we are convincing them of anything, but they have to know who we are, what we’re doing, and how we can communicate with each other.

After the election, we could have a period where we don’t know the results; what should folks do during that period?

Duncan: The first thing I thought of is reminding all of us to breathe. “Breathe” has taken on so many dimensions in the last few months—from “I can’t breathe” to people suffocating on smoke. Be cognizant of taking that breath and centering. Second, to create trusted sources of information so we’re able to communicate with each other when all the disinformation is going down. And third, to understand the different methods we can use that will protect civilians and prevent violence.

Kabaki: One of the things that was very helpful during Kenya’s contested elections [in 2017] was a process of regularly updating [people] on what was going on. There’s so much anxiety, but sharing information on what’s going to happen next got everybody to calm down enough to let the conversation continue.

The other lesson was identification of where people are vulnerable. The whole country won’t be vulnerable; there are specific populations that will be vulnerable to violence. We [need to] share this information and identify what they are vulnerable to and start thinking about how we can protect them. I watched some demonstrators in Kenya going into the streets and doing some destruction. They didn’t have a voice to say what they want. When there was a leader identified who articulated their needs so that those issues were discussed and listened to, it cut down on the violence.

What practical things can communities of faith can do?

Duncan: Churches can organize patrols of unarmed civilian protectors. Those people can be trained, and they can be on call for when the community is under threat—when there is another police shooting, when there is an adverse court decision, when there are attempts to subvert the results of the elections. These are extraordinary times and they should not be downplayed; we are going to need this kind of action.

Kabaki: After the killing of George Floyd, a group of religious leaders went and protected the shops and the businesses during subsequent demonstrations, because they were trusted by the communities. They just stood there and were able to encourage the protests and at the same time discouraged looters from taking advantage of the situation.

It would also be very helpful for people to think about the security of the demonstrators at the same time as they’re setting up demonstrations, not as an add-on—it needs to be inherently part of the activity that they’re putting in place. Talking about safety and security is not something you do as a Plan B.

THIS APPEARS IN THE NOVEMBER 2020 ISSUE OF SOJOURNERS
SUBSCRIBE