The continuation of Thich Nhat Hanh 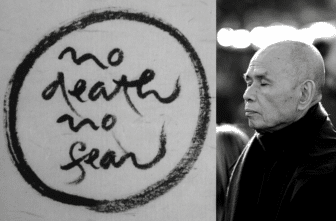 Just as he believed in no beginning and no end, Thich Nhat Hanh continues to live in the initiatives and hearts he inspired.
Mel Duncan January 28, 2022
I was disconcerted to read the New York Times headline, “Thich Nhat Hanh, Zen Master and Political Reformer Dies at 95.” How can they announce the death of someone who teaches that birth and death are unreal notions? In “No Death, No Fear,” Thich Nhat Hanh wrote:

Even the term “passed away” as included in the announcement from the International Plum Village Community of Engaged Buddhism doesn’t quite capture the event. Thich Nhat Hanh teaches that we are a continuation just as the cloud becomes rain. We cannot become nothing. We are always arriving and always departing.

Thich Nhat Hanh, or Thay as he is affectionately called, helped guide me to the vision of what was to become Nonviolent Peaceforce. While studying at the University of Creation Spirituality in Oakland, California in 1997-98, I was profoundly challenged about the adversarial way that I organized: us versus them, good versus evil, 50 percent plus 1 percent meant we kicked their ass. Instead, I was encouraged to understand my work and life from a basis of unity rather than duality. I was challenged to my very core. Yet, when the student is ready the teachers appear. I kept hearing about some Vietnamese monk who I had never heard of. Soon I was reading everything that Thich Nhat Hanh had written and attending a Buddhist sangha for activists in the San Francisco Bay area.

A year later I was sitting in Plum Village, his monastery in Southern France. Within minutes of my arrival, I knew that I was in way over my head. We had 12 hours of silence, and we didn’t talk much during the other 12 hours. I became painfully aware of how much I relied on verbal and nonverbal cues for affirmation. There were almost none from the monks. I was shocked at how infrequently I occupied the present moment. I was living with monks who didn’t really seem to care what century we were in as I wondered if the Chicago Cubs had made the playoffs.

Thay’s message was clear. We could no longer afford to take sides. The stakes had become too high for all sentient beings on our planet. We had to proceed from a basis of our unity. How prescient he was in 1998.

I was on a bus leaving Plum Village when I wrote the vision for a nonviolent peaceforce. From my notes taken at the monastery, I quoted Thay:

Take the situation of a country suffering war or another injustice. Try to see that every person involved in the conflict is a victim. See that no person including all those involved in the warring parties or on what appear to be opposing sides, desire the suffering to continue.

This vision formed the spirit as well as the concept note I took to the Hague Appeal for Peace a few months later where we started to organize the Nonviolent Peaceforce.

His teachings as contained in the poem, “Call Me by My True Names,” helped shape our formulation of nonpartisanship and was use in our training. In this poem he describes that he is both the swimming frog and the snake who eats the frog; that he is the 12-year-old refugee girl raped by a sea pirate and he is the sea pirate.

Please call me by my true names,so, I can hear all my cries and laughter at once,so I can see that my joy and pain are one.

In our work in conflict zones we have developed, applied and refined a variety of methods that effectively protect people. Yet, we have learned that our presence is the most valuable resource we offer to civilians living in violent conflicts. This is a lesson that Thay already knew. As he wrote, “The most precious gift we can offer others is our presence.”

Thich Nhat Hanh continues to live in the Nonviolent Peaceforce and in the initiatives and hearts of thousands. So, my friend, I will meet you tomorrow if not before and again on the myriad paths of life.